Touchscreens are found in countless public places, as well as in more controlled environments such as research labs and hospitals. These touchscreens present a real opportunity for infectious pathogens to transfer from one person to another. 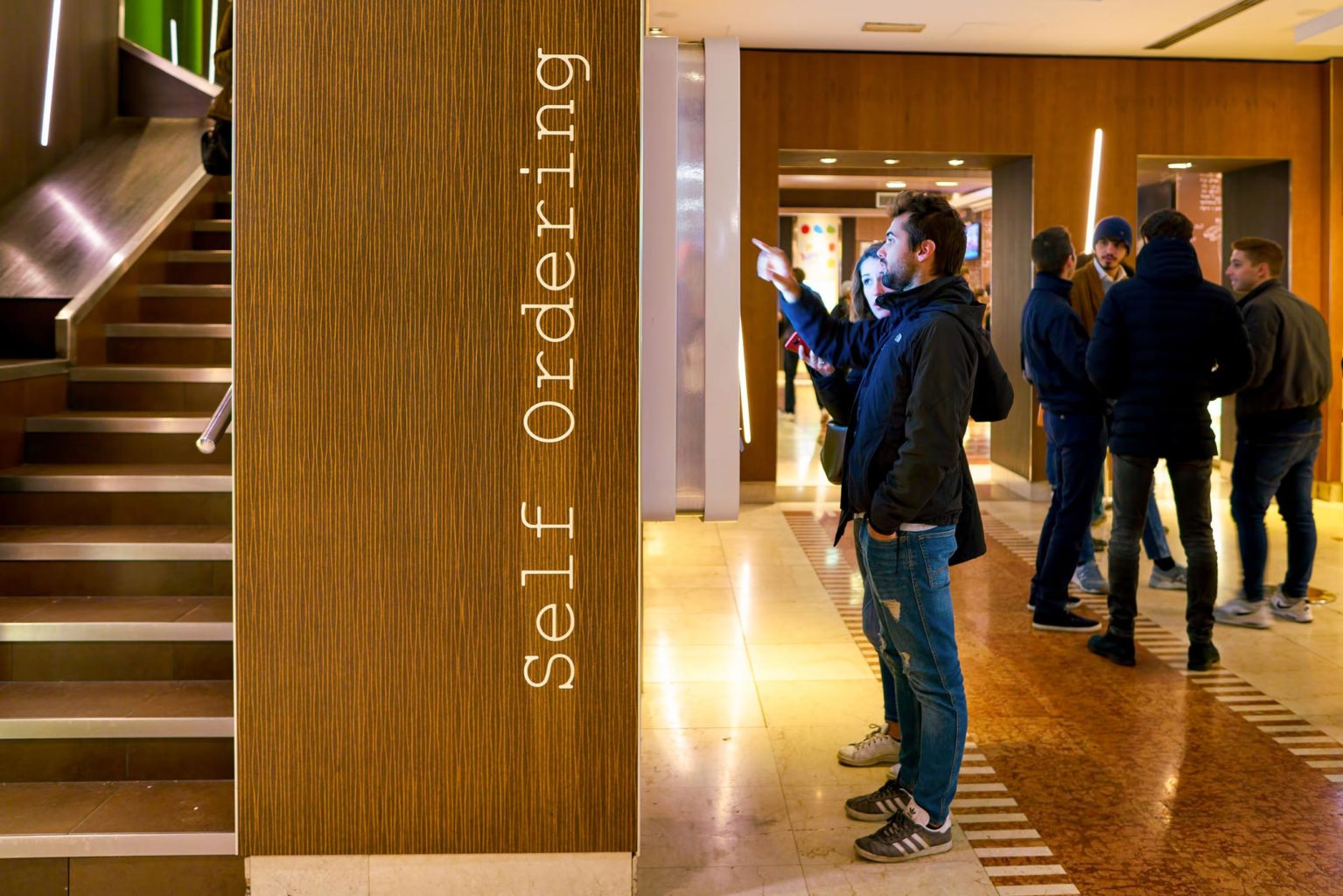 Within this article, we look at how diseases are transmitted via touchscreens. We then explore how substituting touchscreen controls for touchless gesture recognition - via the affordable Time of Flight (ToF) sensor technology - can help to mitigate this risk.

The increasing prevalence of touchscreens in our day to day lives means they are developing into a disease vector of ever-increasing proportions.

Touchscreen technology is a straightforward, cost-effective, do-it-yourself option for a wide range of tasks that were formerly undertaken by human beings. A few examples include:

Empowering customers to perform these tasks via touchscreen expedited routine activities and offers convenience for both customers and companies, in most cases, at least.

This increased convenience is not without its downsides and these screens can become home to a wealth of viruses and bacteria which accumulate via thousands of unwashed fingers, allowing them to be effectively spread between users.

This risk becomes even more evident when we consider touchscreens in locations where hygiene is of considerable importance; a key example being fast-food restaurant chains that employ touchscreens to facilitate ordering in many branches.

While we may not automatically be concerned about touching such a screen and then eating fast-food with our hands, research from 2018, published by London Metropolitan University really highlighted this issue, sharing the list of harmful and infectious bacteria found on the touch screens in nearby McDonald’s restaurants. This included staphylococcus, which can bring about severe symptoms if ingested.

While the screens were routinely cleaned, it would be unrealistic to expect this to be done after every single use. With one particular study of 3,749 adults in an American college town suggesting that 43% of people do not wash their hands with soap following a trip to the bathroom, thorough hygiene control of a touchscreen in this setting is practically impossible.

Touchscreens are also regularly in use within healthcare environments such as hospitals and pharmacies. The importance of infection control in these environments means that they are cleaned regularly and meticulously, but even a single lapse in touchscreen hygiene control could have dire consequences.
It is also worth noting that there is evidence to suggest that frequent cleaning of touchscreens with bactericidal agents can cause damage to them.

Our usual responses to these risks are proportional to the seriousness of the infection risk within a particular setting. A touchscreen in a train station or hotel may only be cleaned on a fluctuating basis, but these are unlikely to pose a higher risk than, for example, an elevator button or handrail.

Touchscreens in use in more controlled environments such as restaurants are considered a higher risk, so these are naturally cleaned more frequently. Additionally, touchscreens in medical settings are normally cleaned often and systematically. 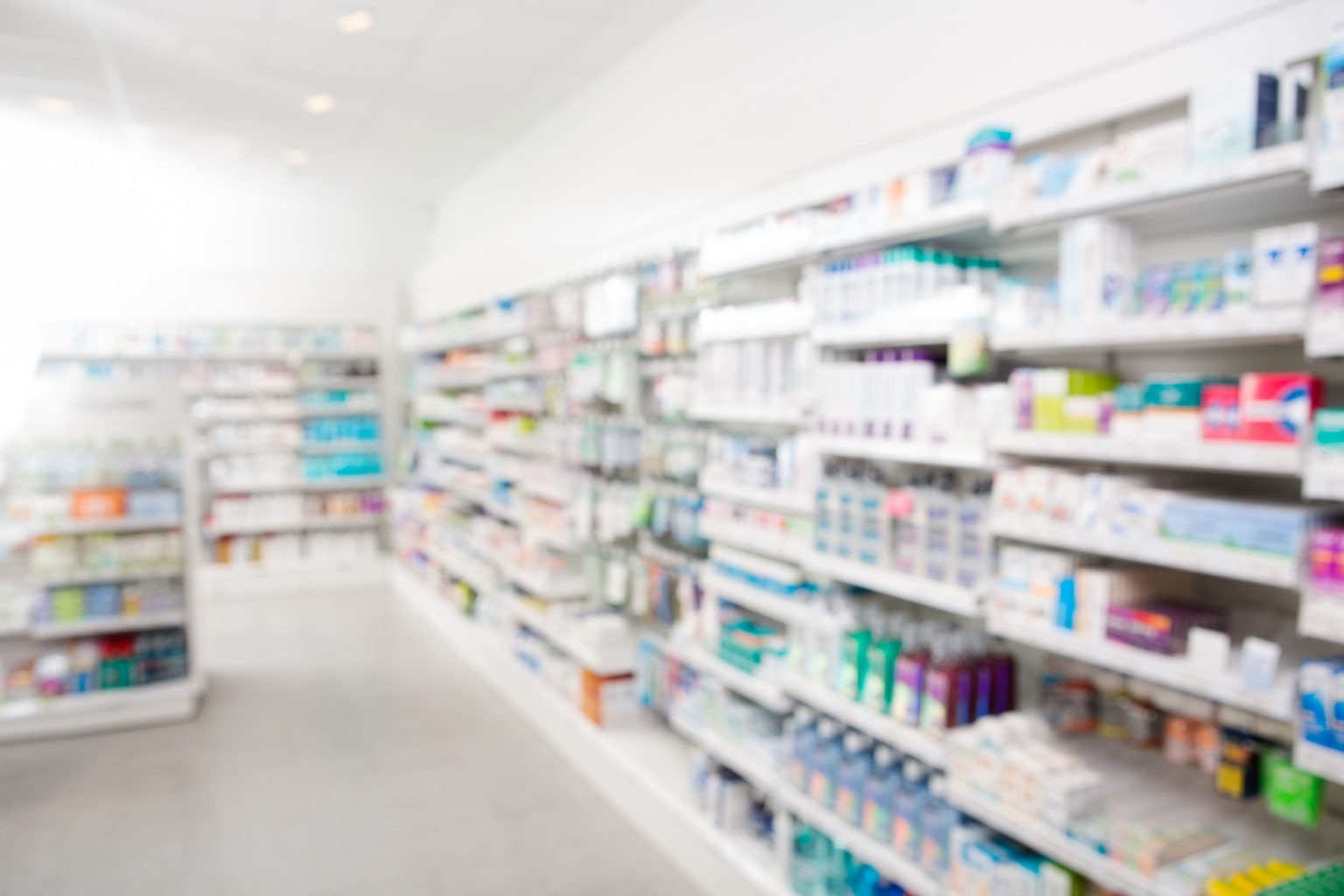 Within these kinds of environments, the best way to help reduce the threat posed by touchscreens would be to replace the touchscreen systems with an equally usable solution that does not involve the need for physical contact. Simple gesture recognition via low-cost sensors may be one such option. 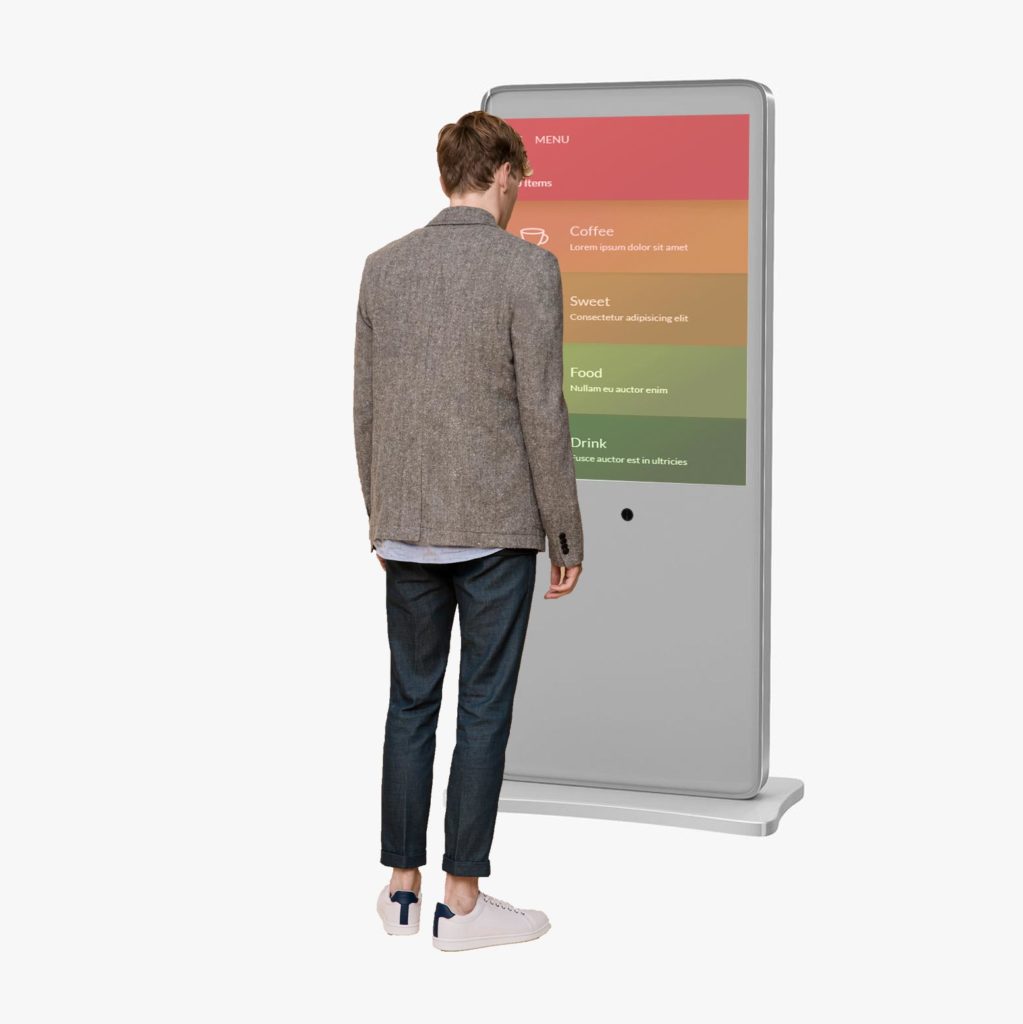 Gesture Recognition as an Alternative to Touchscreen Technology

This technology could provide a considerable advantage for applications where touchscreens are normally used. If we consider the examples mentioned previously, the implementation of simple gesture recognition as an alternative to touchscreens would not only reduce infection hazards, but the use of touchscreens for basic interactions would mean that less expensive, regular screens could be used in their place.


Screen Activation Based on People Presence in Close Proximity

The installation of gesture recognition technology can present further advantages. Gesture sensors can function as proximity sensors, prompting devices to switch on when a user is present in front of the device and switch off when they move away or there are no users present. This not only offers energy savings, but the content displayed can also be tailored to respond to movement and presence. 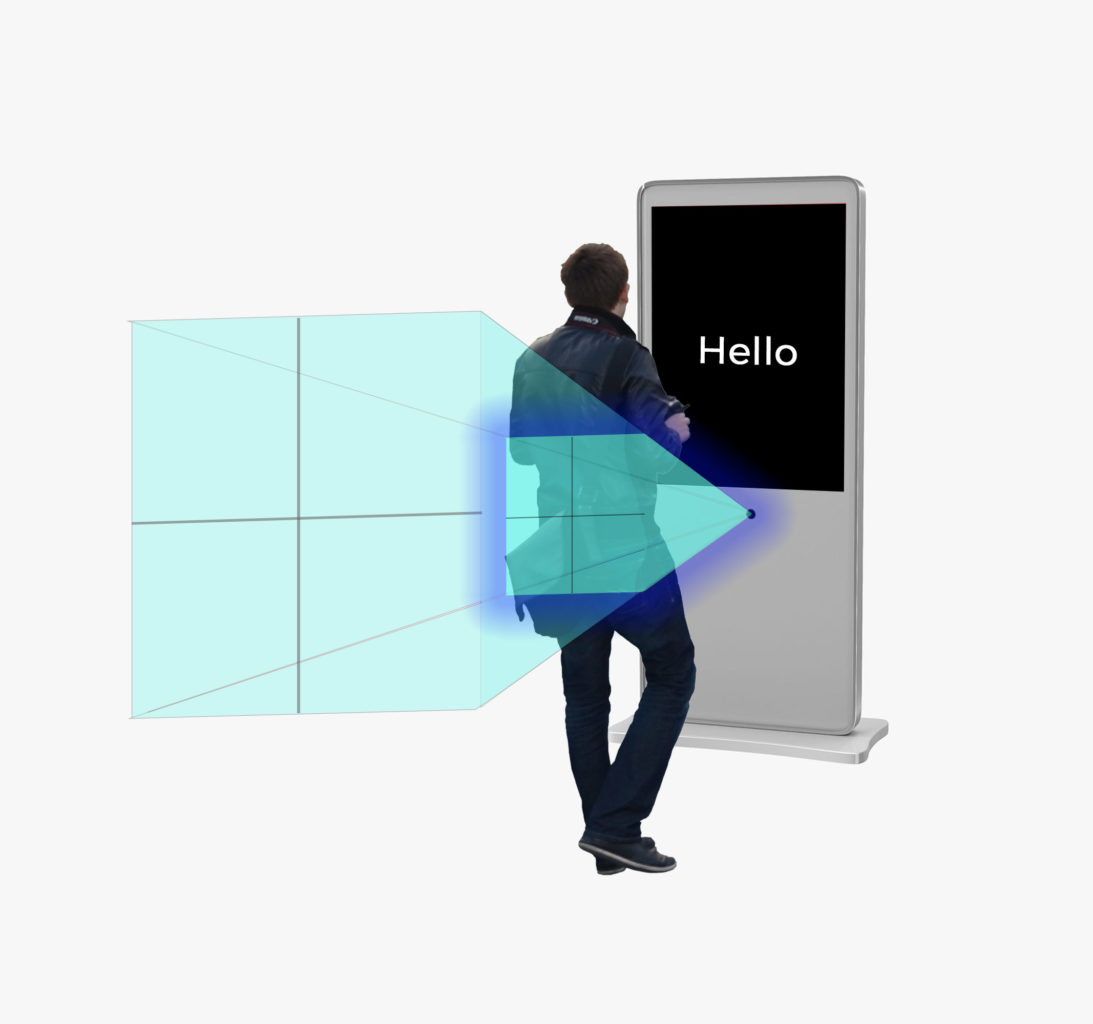 Time-of-Flight (ToF) technology provides a leaner and less computationally demanding solution to basic gesture recognition. Time-of-Flight sensors function by emanating a beam of invisible infrared light then quantifying the amount of time taken for the light to reflect off a target and return to the sensor. By obtaining an accurate measurement of this, the sensor can build up a rudimentary 3D image of the environment in front of it.

Terabee, the sensor manufacture company, has created gesture sensing systems which can operate alongside their series of inexpensive distance sensors, including the TeraRanger Evo Mini.

These modular ToF sensors have been developed to be as flexible, lightweight and precise as possible, ensuring that they can provide an efficient gesture-sensing solution at a price point that is retail-compatible. 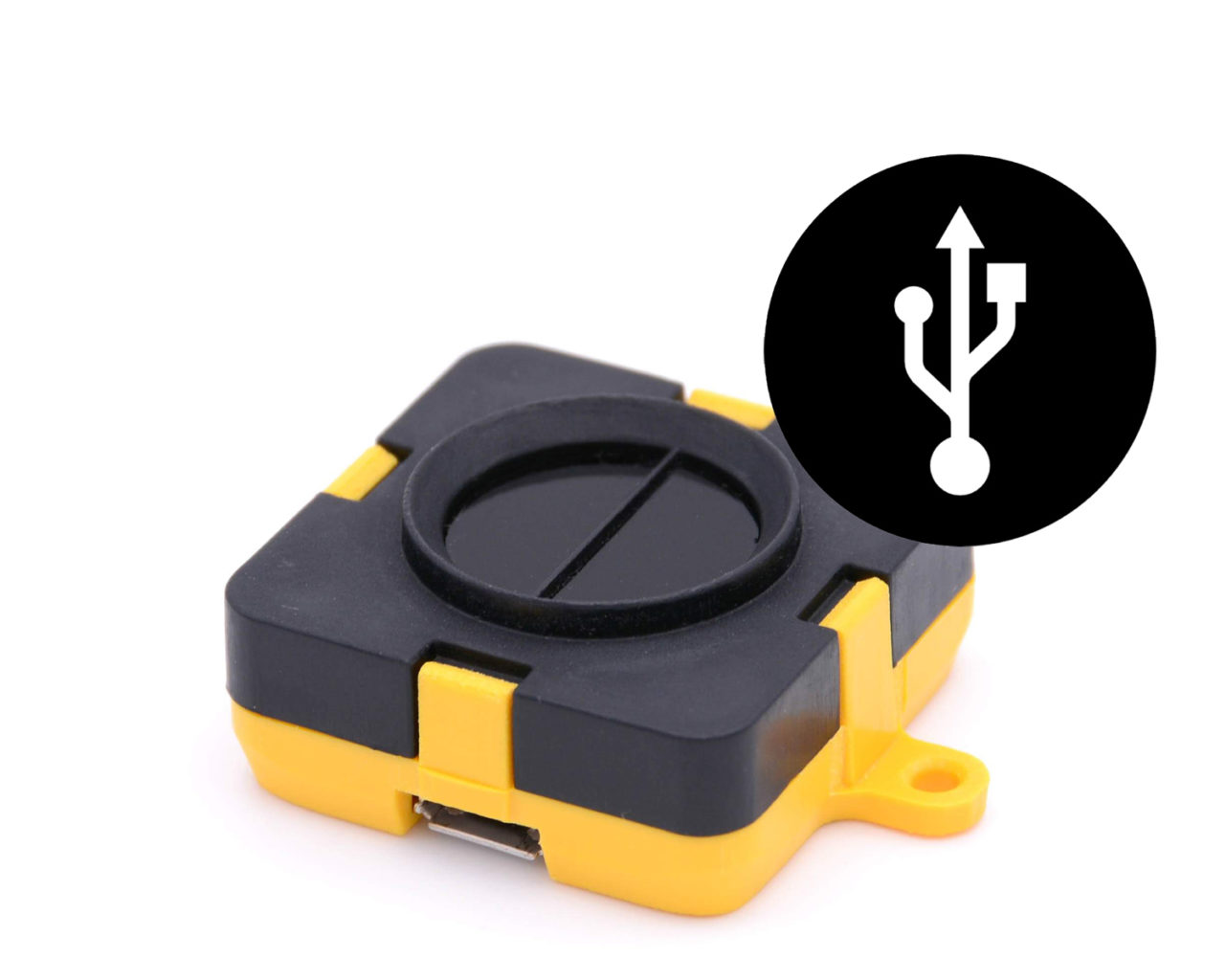 Our leading ToF sensors can easily distinguish between noise and real interaction, retaining full functionality in both low light and total darkness. Terabee sensors have been developed for optimum compatibility with other technologies as standard, with UART and USB interfaces included, and nearly infinite possibilities for integration with other systems.

Terabee’s engineers possess a deep understanding of sensor technologies and our applications, and we can use this expertise to design custom sensing solutions for any application.

Contact us directly if you would like to order a sample, or to find out about developing a bespoke contactless gesture-sensing solution. 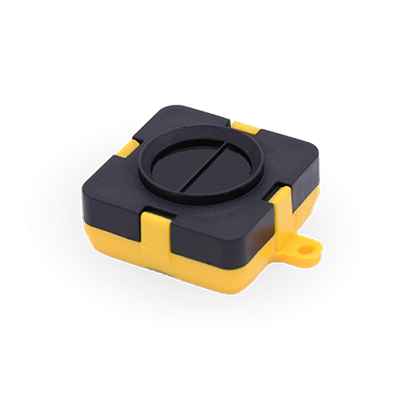 Single and multi-pixel capability in 1 sensor - 0.03m to 3.3m range, 9 grams
from €38.00 ex. VAT
Our smallest and lightest TeraRanger Evo sensor provides versatile performance and value for money. Optimized for indoor distance sensing, Evo Mini offers ranging capabilities from 3 cm up to 3.3 m. Switch easily from single-pixel to multi-pixel modes. Evo Mini also features a robust ABS enclosure for increased protection and is supported with Arduino and Raspberry Pi sample codes and free ROS nodes to get your projects up and running in no time.
Discover and buy 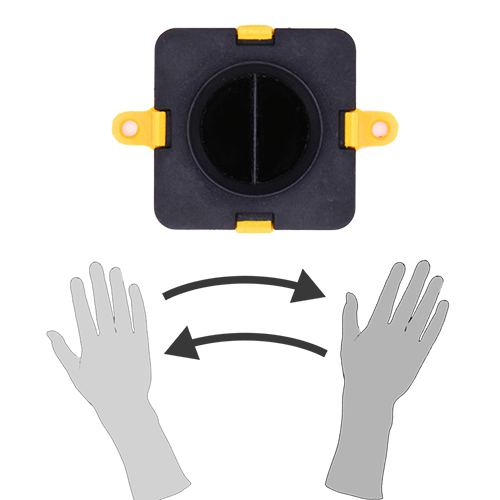 Use simple ‘swipes’ of the hand to control equipment, open doors and interact with screens and kiosks.
Go To Swipe Plus
Now more than ever there is a substantially reduced appetite for touching doors, screens, kiosks and other commonplace control systems in the public domain. Rising to meet this demand, Terabee has created the Evo Swipe sensor for simple gesture control. Simply swipe your hand through the air right to left, left to right, or up or down, to control machines, doors, information displays and many other systems. By eliminating the need to press buttons, pull levers, or click a mouse, risk such as virus spread and infection are greatly reduced.

The small optical Time-of-Flight sensor is easy to install, setup and use. Everything is on-board to facilitate left/right, right/left gesture recognition.

**This product is out of stock and will be discontinued. Please refer to the Evo Swipe Plus for the next generation version.**
Discover and buy 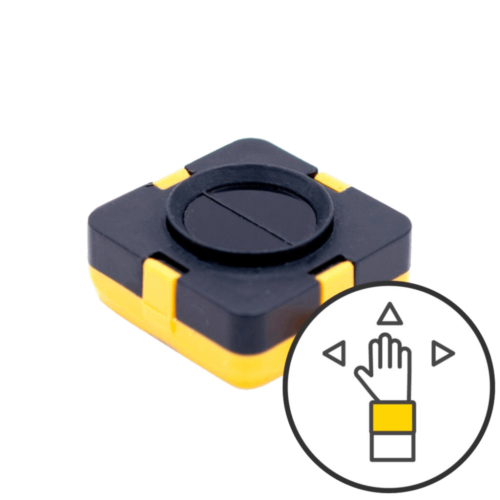 Detect people movement, trigger actions based on proximity, measure customer engagement and perform touchless gesture recognition. Evo Swipe Plus does it all in one compact and easy to integrate ToF sensor
from €129.00 ex. VAT
Evo Swipe Plus is ideally suited to digital information screens and kiosks, interactive advertising, smart retail installations and all manner of touchless gesture recognition applications.

The sensor can be used in two configurations. One allows presence detection and counting, event triggering and touchless gesture control. In the other configuration presence detection is replaced with a bi-directional people traffic counter. This allows you to track how many people pass by your digital asset from right to left or left to right, and when, and to see how many people engage with it.

At a time when virus propagation is in all our minds, the touchless left/right, right/left and validation gesture commands of Evo Swipe Plus eliminate the need for continual disinfection of touchscreens and keypads, whilst giving users an added sense of security.

Innovators Vs Covid-19: Terabee in the media